Please note: You are now making an order on behalf of a user.
Home > Soft Corals > Flaming Sun Zoa Colony 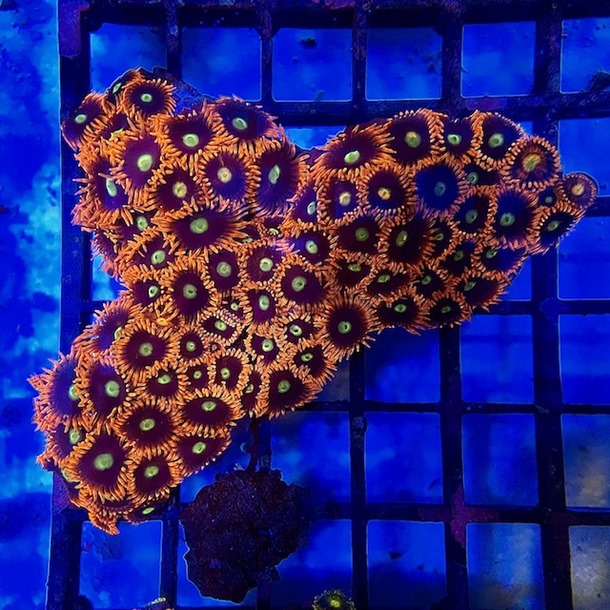 Flaming Sun Zoa Colony from Tonga and around the Central Pacific

The Flaming Sun Zoa's center colouration of bright green is ringed with a contrasting blue surrounded by fiery orange tentacles. The colonial nature of the polyp corals creates an impressive flush of colour that is visually stimulating yet pleasantly harmonious.

Over time, an established colony of Flaming Sun Zoas will create an impressive living carpet of bright colour reminiscent of a field of underwater wildflowers. They are colonial animals with multiple individual polyps attached to a piece of live rock. These polyps have the ability to sting other polyps or corals. While the sting is not strong, they are semi-aggressive and need to have space between their colony and any neighbors since they tend to crowd them out.

Zoa Polyp are easy to maintain, making them a good choice for beginner reef aquarists. They require a moderate light level combined with medium water movement within the aquarium. For continued good health, they will also require the addition of iodine and other trace elements to the water. The Flaming Sun Zoa will reproduce easily in the reef aquarium by budding (splitting off a portion of their base or mouth) to increase the size of the colony.

The Flaming Sun Zoa contains the symbiotic algae zooxanthellae which satisfies almost all of their nutritional requirements. If the lighting is not optimal, the Flaming Sun Zoa should be fed micro-plankton or baby brine shrimp.

It is common to receive a rock that is not completely covered in polyps. However, under the right conditions, they will quickly spread across this and surrounding rocks in the aquarium.