Please note: You are now making an order on behalf of a user.
Home > Critters > Crocea Clam 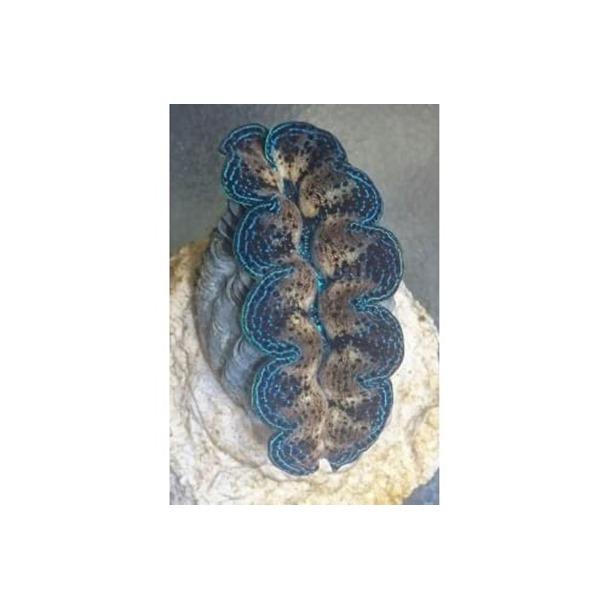 Reward Points
You will earn 100 Points
This Product is Available For Pre-order!
Crocea, Boring Giant Clam
Calculator
Livestock
Livestock arrives in and out of stock very regularly, depending upon availability of the item from the source. The more rare and expensive items are often difficult to hold in stock, and can take time to source, so we generally require a deposit to locate and purchase the extremely rare items

Multicolored Crocea Clams are beautiful clams oftentimes displaying a variety of colorations with intricate patterns. These clams are also referred to as Crocea Clam, Boring Clam or Crocus Clam, and are the smallest of all Tridacna spp., reaching a maximum size of 6" in the wild. The Crocea Clam can penetrate through limestone substrates by releasing an acid to break down the carbonate in the stone. It uses the ridges of its thick shell to dig into the rock by opening and closing quickly through the use of its large byssal muscle, giving the clam the common name "boring clam." This burrowing behavior helps to protect it from predators such as sea stars, along with Angelfishes, Butterflyfishes, and other reef dwelling species that consume bivalves. In the wild, the Crocea Clams often live together in great congregations, and can display a variety of colorations and patterns comprised mostly of purple, green, brown, and blue with lighter colored spots and markings. Vibrant blue or green Crocea Clams as well as ones consisting primarily of gold normally demand a higher price and are considered Electric, Ultra Colored, or Premium Colored. Tridacna crocea are naturally found throughout the Indo-Pacific and Western Pacific oceans. They can be identified by having a relatively smooth shell that is thick and heavy, and is much taller than T. maxima, which it can closely resemble in the appearance of the mantle. Like some other members of its genus, T. crocea attach to hard substrate or rockwork with thread like appendages called byssal filaments, and can eventually burrow or bore into porous substrate or rockwork in the home aquarium. Crocea clams will arrive either unattached or attached to a small piece of rock or substrate. They will normally attach to a solid surface within a few days of being introduced into the aquarium, so keep in mind that their first placement should be considered permanent. Never forcibly remove an attached clam from the substrate or rockwork, as lethal damage to their foot and other tissue will be inevitable. As a last resort, to remove a clam from a hard surface gently cut each byssal thread with a razor blade as close to the attachment point of the rock or solid surface, making sure not to slice or damage any tissue. In the home aquarium, Crocea Clams require intense lighting to thrive as they contain the symbiotic algae called zooxanthellae, and receive the majority of their nutrition from the light through photosynthesis. Smaller T. crocea that are 2" or less in size are much more sensitive to very intense lighting as their membrane is much thinner than larger specimens. For this reason, care should be taken to properly photo-adapt them to the existing reef aquarium lighting in a similar manner to newly introduced stony and soft corals. When adapting a new Crocea Clam to very intense lighting, it is ideal to set them on a small rock or in a plastic dish with coarse substrate at the bottom of the aquarium. Over time, the clam can then be slowly moved up higher in the aquarium. Tridacna clams are also filter feeders and constantly filter the water for small particulates. Crocea Clams larger than 2" do not require supplemental feedings, but smaller T. crocea that are less than 2" should be fed a phytoplankton or greenwater supplement several times per week if maintained in a nutrient poor reef aquarium. Tridacna crocea are relatively hardy clams that require intense lighting and good water flow in the home aquarium. Proper water chemistry is very important, and they will thrive when calcium levels of 380- 450 mg/L, alkalinity level of 8-11 dKH, and magnesium level of 1280-1350 ppm are maintained.