Please note: You are now making an order on behalf of a user.
Home > Critters > Fire Shrimp 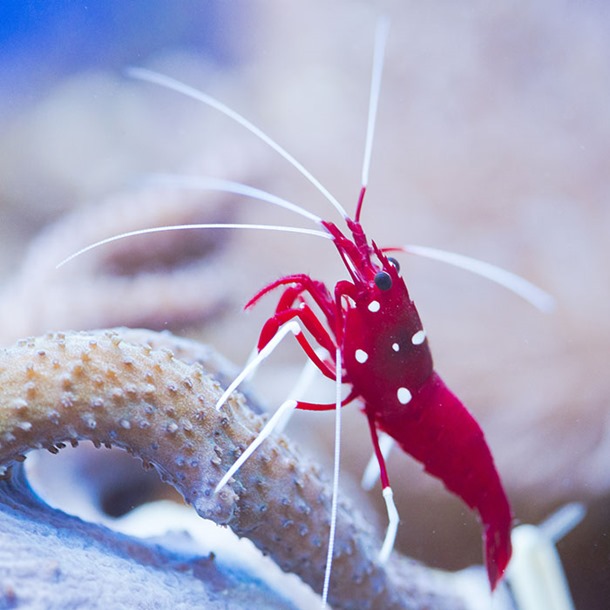 Fire Shrimp also known as Blood Shrimp or Scarlet Shrimp is one of the most popular ornamental shrimp in the marine aquarium hobby. The Fire Shrimp boasts striking blood-red coloration with brilliant white spots and long white antennae

The Fire Shrimp is one of the most popular ornamental shrimp in the marine aquarium hobby. The Fire Shrimp boasts striking blood-red coloration with brilliant white spots and long white antennae. Depending on which region of the Indo-Pacific from which it originates, the Fire Shrimp may have the white dots just on its carapace or covering its entire body. The Fire Shrimp is most active at night and prefers a habitat aquascaped with caves and overhangs where the lighting is not too intense during the "day". While the Fire Shrimp will tolerate its mate, others of its own kind will be chased away or harassed unless kep in a very spacious aquarium setup.

IThey are generally peaceful with most other organisms in the reef system unless they impinge on its territory. As a "cleaner shrimp," the Fire Shrimp will set up cleaning stations and remove dead tissue and parasites from fish that present themselves. The Fire Shrimp will also scavenge for meaty bits along the substrate bottom. Often, only its antennae will be visible.

Their diet should include live or frozen foods, pellet and flaked foods.