Please note: You are now making an order on behalf of a user.
Home > Dips & Treatments > Brightwell Lugol's Solution 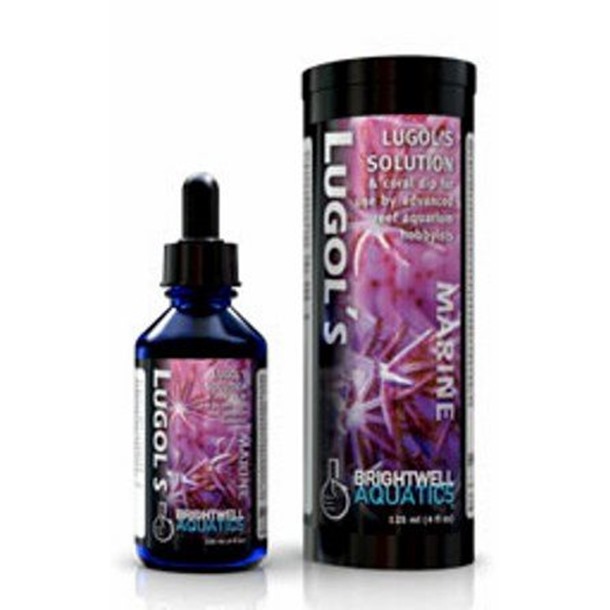 Brightwell Aquatics Lugol's is an extremely powerful iodine/iodide solution.  It will raise the iodine concentration of a marine aquarium or reef and it can also be used as a dip for new corals. It should only be used by advanced aquarists. Lugol's is not formulated for human use.

Brightwell Aquatics Lugol’s is an extremely powerful iodine solution. It should only be used by advanced reef aquarists to dose iodine as well as to create a dip for corals and their allies. The importance of iodine in a reef aquarium cannot be overstated. Presence of iodine is vital to hermatypic invertebrates (i.e., corals, clams, and their allies that harbor zooxanthellae) because it is used to detoxify excess oxygen produced by zooxanthellae. This oxygen irritates sensitive tissue. Corals and clams that appear to shrivel or close under intense lighting are attempting to shade their zooxanthellae crop to reduce the rate of oxygen production. Iodine (as the iodide ion) essentially bonds with oxygen to form non-toxic iodate, relieving the need to shield zooxanthellae and enabling the host organism to open fully. The predominant form of iodine in seawater is iodide. The natural seawater concentration of all iodine species combined is approximately 0.06 ppm, classifying it as a minor element. Even in this small concentration, iodine is required for survival of fishes, crustaceans, macroalgae and kelp, and hermatypic invertebrates alike. Iodine binds rapidly with latent organic material and is passively removed by aggressive protein skimming and the use of organic-adsorption products such as activated carbon and specialty resins. The combined biological and chemical depletion of iodine necessitate that its concentration be monitored and the aquarium supplemented as needed. The rate at which iodine is extracted from the water is determined by the stocking density of reef-building livestock, type of lighting, and other biological, physical, and chemical conditions. Once the rate of iodine uptake in the aquarium has been determined, the proper dosing rate of this product can be easily calculated.