Please note: You are now making an order on behalf of a user.
Home > Marine Fish > Axilspot Hogfish 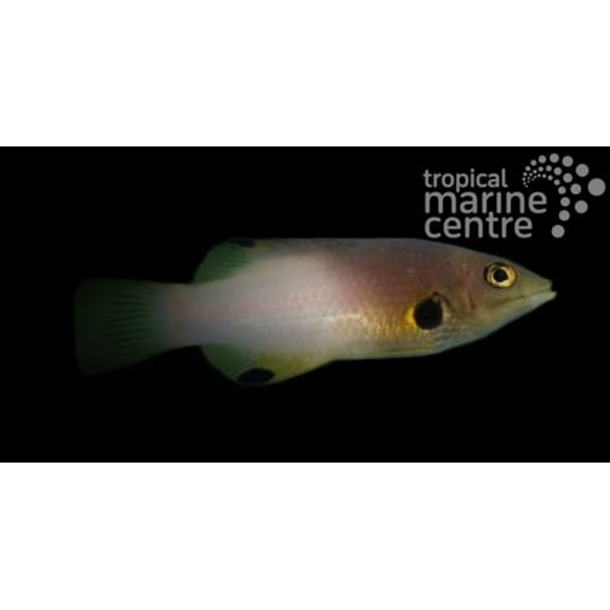 All of our livestock are only available for collection
Product Code: RNC-01804 Available To Order
Share it

Axilspot Hogfish also known as the Panda Hog or Polkadot Wrasse are found from the Red Sea to South Africa, east to the Marshall, Marquesan and Tuamoto islands, north to Japan.

Captivatingly colourful and loaded with personality, the Axilspot Hogfish is also referred to as the Panda Hogfish, or Polkadot wrasse. Juveniles are brown to black in colouration with nine white spots. As the Axilspot Hogfish matures, three stunning false eyes will adorn the contrasting colouration ranging from its fuchsia head to a sunshine yellow tail. An abrupt angle down the midpoint of the body marked in white makes this hogfish appear half-dipped in shadow, half in light.

A 70 gallon or larger aquarium with hiding places should be provided. The Axilspot Hogfish is a very peaceful fish that adjusts quickly to most aquariums. If more than one Axilspot Hogfish is going to be added to the tank, it is very important to do this simultaneously as they will be slightly territorial among themselves. When full grown, mature Axilspot Hogfish may take a liking to smaller ornamental shrimp that are introduced after the hogfish is established in the reef aquarium.

The diet consisting of meaty foods including vitamin enriched brine shrimp or mysis shrimp is preferred, as well as a high quality marine flake food.