Please note: You are now making an order on behalf of a user.
Home > Marine Fish > Banded Butterflyfish 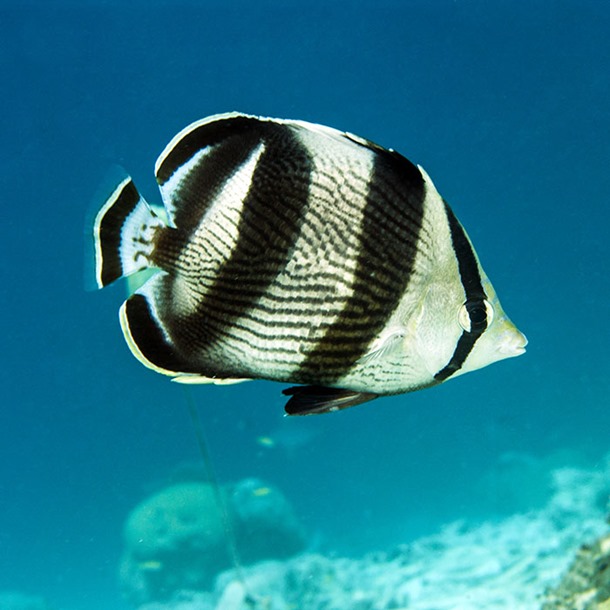 All of our livestock are only available for collection
Product Code: RNC-00687 Available To Order
Share it

Banded Butterflyfish are found around Bermuda, the Gulf of Mexico and Brazil.

A perfect choice for beginners, The Banded Butterflyfish is an easy going species that gets along well with other reef fish. Striking in its contrasting beauty, it has a deep, thin, somewhat disc-shaped body, with a concave forehead and short snout. The coloration of juveniles and adults can be quite different. Juveniles have large, ringed black spot at the base of the dorsal fin, four vertical body bars, with an overall body color of brownish-yellow instead of the white that adults have as a base. The Banded Butterflyfish are most commonly found alone or in pairs, in shallow waters around coral reefs. Most active during the day, and sleeping at night, they seek shelter in the evening, as they are highly vulnerable to larger predators. They are a very peaceful butterfly species. The Banded Butterflyfish is a carnivore, feeding on reef inhabitants such as tube worms, anemones, corals, and occasionally crustaceans. It is not recommended in a reef aquarium, as they will eat most invertebrates. The coarseness of its teeth allows it to scrape at invertebrates that make up its diet. Their diet should be a variety of chopped meaty foods and vitamin enriched or colour enhancing food. They may also clean parasites from other fish.