Please note: You are now making an order on behalf of a user.
Home > Marine Fish > Bicolour Goatfish 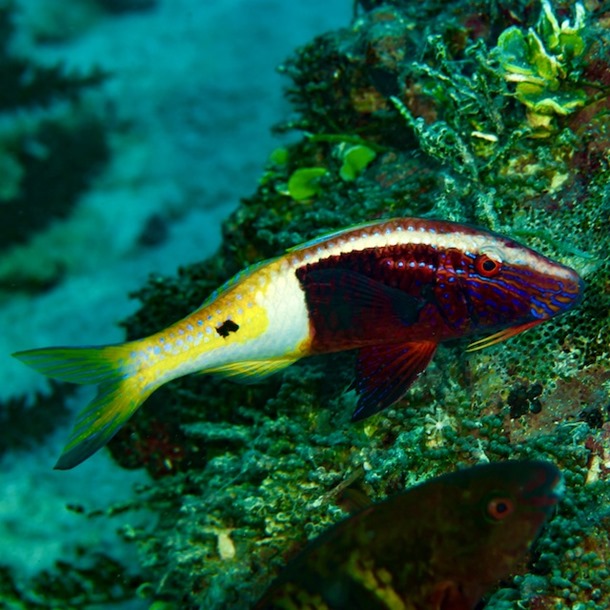 All of our livestock are only available for collection
Product Code: RNC-00764 Available To Order
Share it

Reward Points
You will earn 34 Points
Select option:
This Product is Available For Pre-order!

Bicolour Goatfish also known as the Half and Half Goatfish or Swarthyheaded Goatfish are found around the Moluccas, Philippines, Samoa, Ryukyus, Tonga and New Caledonia.

The Bicolour Goatfish has a burgundy anterior and yellow posterior divided by a white band. There is a black dot on the posterior portion and a pair of white stripes on the anterior portion giving it the name Dash and Dot Goatfish. Both head and tail also have blue markings.

If you’re looking for the unexpected, consider the Bicolour Goatfish. These hardy characters introduce energetic activity to the aquarium bottom as they actively patrol the sand bed to satisfy their appetites, making them a unique addition to your aquarium. An established aquarium with plenty of swimming room is recommended, and it needs non-aggressive tank mates.

The bottom of the aquarium should have a moderate substrate layer so the Bicolor Goatfish may use its barbels to sift through the substrate in search of food invertebrates, small crustaceans, worms, they will leave corals alone. Because it eats the invertebrates, the nitrogen load capacity of the sand will be reduced and it will be well-oxygenated due to the sifting. Goatfish prefer to be housed with less aggressive tank mates.

The diet should consist of fresh or frozen meaty preparations. Goatfish have a high metabolism and should be fed often during the day.