Please note: You are now making an order on behalf of a user.
Home > Marine Fish > Blue Line Rabbitfish 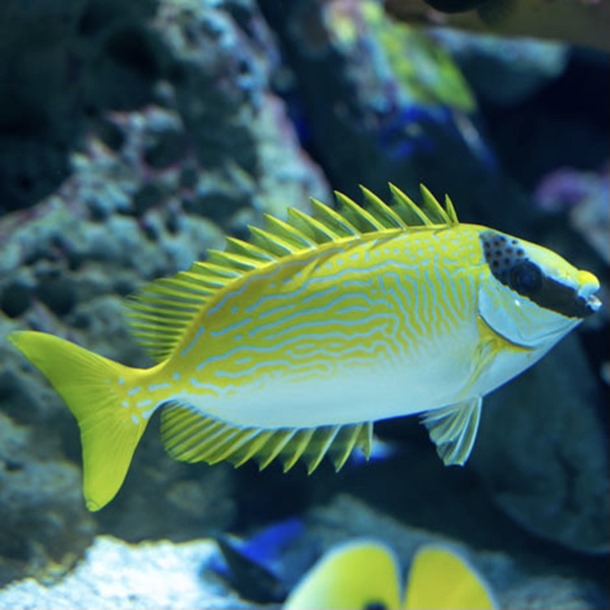 All of our livestock are only available for collection
Product Code: RNC-01129 Available To Order
Share it

Blue Line Rabbitfish also known as the Blue Scrawled Rabbitfish, Masked Rabbitfish, Decorated Rabbitfish or Masked Spinefoot are found from the Cocos-Keeling Islands and the South China Sea to the Gilbert Islands, north to the Ryukyu Islands, south to the southern Great Barrier Reef and New Caledonia.

The Blue Line Rabbitfish has an oblong shape to its body and has a beautiful series of yellow markings with a yellow back and tail. The eyes of this fish are masked by a black stripe that extends from the bottom of the mouth to the top of the head. As the black stripe passes the eye it becomes spotted, lending an interesting look to this Rabbitfish.

It requires a larger aquarium. It is a very peaceful species except when housed with other Rabbitfish. The Blue Line Rabbitfish may be housed with more aggressive fish and can be kept in pairs. Its predators will tend to leave it alone because of its venomous dorsal spines, which it can raise when disturbed. Care must be taken when handling this fish to avoid the possibility of being stung by its venomous spines. Rabbitfish are generally reef-safe if they are well fed. If not, it is possible for them to nip at and consume some species of LPS and soft corals.

Its diet should consist of a variety of vegetable matter and algae. Feed the Blue Line Rabbitfish Red Gracilaria feeding algae, any species of caulerpa and dried seaweed fed with a lettuce clip.