Please note: You are now making an order on behalf of a user.
Home > Marine Fish > Brazilian Gramma 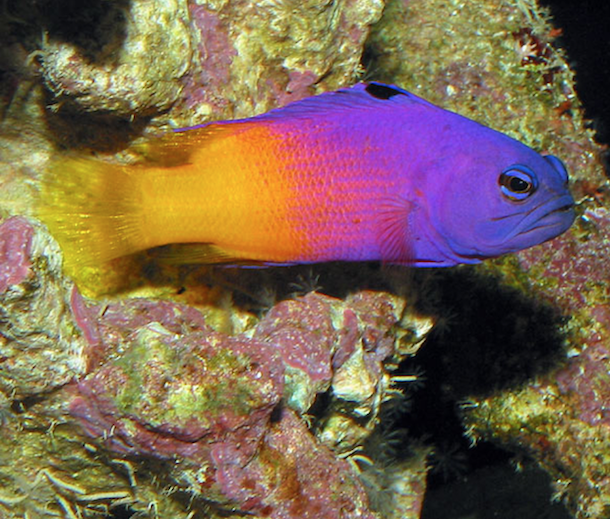 All of our livestock are only available for collection
Product Code: RNC-01173 Available To Order
Share it

Brazilian Gramma also known as the Emperor Gramma or Brazilian Basslet are endemic to Brazil.

Brazilian Gramma, is a small colourful basslet which looks very similar to the more commonly available Royal Gramma (G. loreto). In fact, most people won't see the difference unless they know what to look for. Both fishes have a purple head which continues into the first half of the body. The other half and caudal fin are orangish-yellow. The biggest difference is that Brazilian Gramma have a larger more aggressive looking mouth and eye, and don't have the yellow stripe(s) on the head which is clearly seen in Royal Grammas.

These fish like the safety of a cave or other hiding spots and they can often be observed upside-down under a ledge. In nature a territory is formed in such caves with 1-4 individuals.  In a small aquarium it is best to only house one Gramma, but if the tank is large enough you can try to house a group. Best buy them small and in different sizes to have the smallest change of quibbling among the group.

These fish are planktivores, so make sure to feed them multiple times a day a varied diet of small meaty live and frozen foods like copepods and brine shrimp. Once they're settled in your aquarium they should usually start eating high quality flakes and pellets as well.