Please note: You are now making an order on behalf of a user.
Home > Marine Fish > Golden Anthias 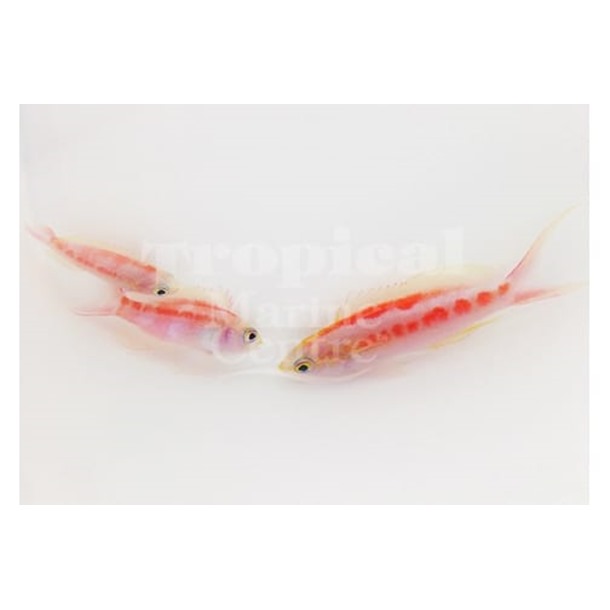 All of our livestock are only available for collection
Product Code: RNC-01562 Available To Order
Share it

Reward Points
You will earn 175 Points
Select option:
This Product is Available For Pre-order!

What makes the Golden Anthias a highly desirable addition for the seasoned reef hobbyist is not only the striking multiple pink and yellow colorations but also its active nature, great personality and overall disinterest in corals, sessile invertebrates as well as dissimilar fishes. Due to limited harvest, isolated locales and extreme depth where they are most abundant, the Golden Anthias is infrequently seen in the aquarium trade, thus heightening the desirability of this jewel of the deep.

As with many Anthias species, the Golden Anthias can be kept singly but does best in small shoals comprised of several individuals. Members of the Anthias group all share the trait of being hermaphroditic. If a dominant male perishes, the largest female of the group can morph into a fully functioning male to take its place. To recreate habitat for the Golden Anthias, aquascape liberally with live rock, creating numerous caves and other hiding places. Be sure to maintain open areas and plenty of surface area for proper water oxygenation. For a dramatic aquarium display, consider a steep reef profile, perhaps with a slight overhang to provide additional shelter as well as diffused lighting.

Once acclimated to a new aquarium, the Golden Anthias do best when fed a varied diet of enriched frozen mysis shrimp, enriched frozen brine shrimp, and over time may eat high-quality flake foods offered in small quantities throughout the day. An attached refugium cultivating copepods and amphipods provides a steady supply of nutritious live food sure to keep this active planktivore content.