Please note: You are now making an order on behalf of a user.
Home > Marine Fish > Grey Head Wrasse 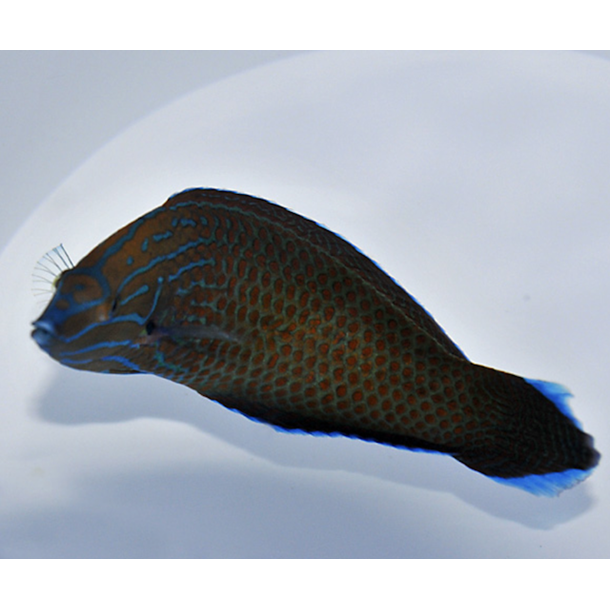 All of our livestock are only available for collection
Product Code: RNC-01774 Available To Order
Share it

Grey Head Wrasse also known as the Chainlink Wrasse or Silty Wrasse are found from the Philippines to New Guinea, north to the Yaeyama Islands, south to Flores, Indonesia to Palau in Micronesia.

The simply-striking Grey Head Wrasse has three white lines on either side of its head, three black spots along its back, and three false "eyes" running along its dorsal fin back to a fourth on the tail in Juveniles and Females. Adult male Grey Head Wrasse, sport vivid blue stripes through their face with orange/red spots along the length of their body.

A 70 gallon or larger aquarium with a tight-fitting lid, a 2-3 inch sandy bottom to hide under if frightened, and other peaceful wrasses, including its own species, is an acceptable environment.

It will eat fireworms and pyramidellid snails, protecting corals and clams which it will not bother. However, larger specimens may prey on smaller ornamental shrimp and crabs. In addition, it may eat feather dusters, wild shrimp, tubeworms, and flatworms. It may also eat parasites off of tank mates. Diet should include vitamin enriched frozen mysis shrimp, vitamin enriched frozen brine shrimp, and other meaty foods along with a high quality marine flake and marine pellet food.