Please note: You are now making an order on behalf of a user.
Home > Marine Fish > Longnose Butterflyfish 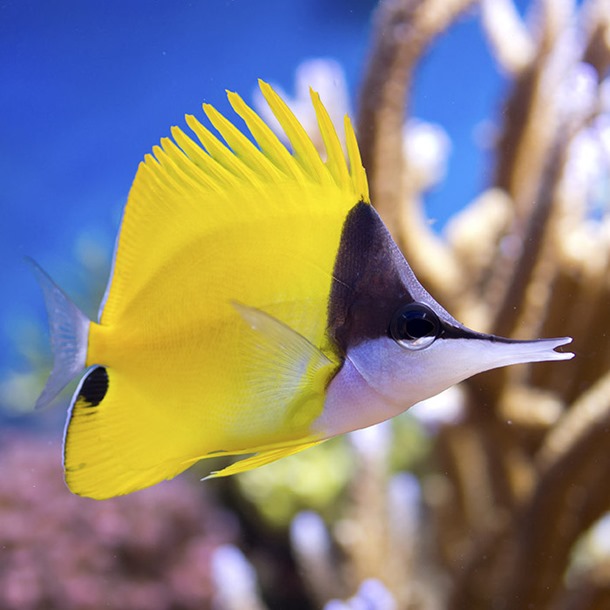 All of our livestock are only available for collection
Product Code: RNC-00718  In Stock
Share it

Reward Points
You will earn 85 Points
Select option:
Add to My Save List
Close

The Yellow Longnose Butterflyfish occur found singly or in schools on reef flats and slopes of the Indo-Pacific region. It has a long snout that resembles a pair of needle nose pliers, for picking food out of crevices and between coral heads. The Longnose Butterflyfish has a yellow body. The color of its head is divided horizontally. The upper half of the head, at the very top of the mouth through the top of the head is black. The lower half is white. The dorsal spines are long and jagged. It is a fairly large Butterflyfish in the wild, but remains a medium-sized fish in the home aquarium. This is a good first butterflyfish purchase, though not necessarily for a beginning hobbyist. If acclimated properly, Longnose Butterflyfish are a hardy addition to any fish-only system. It does best if kept in an aquarium with peaceful tankmates. Use caution if housing this species in a reef aquarium, as it may nip at corals and sessile invertebrates. It should be fed a varied diet of chopped meaty foods mysis shrimp, crustacean meat, and frozen preparations.