Please note: You are now making an order on behalf of a user.
Home > Marine Fish > Pyjama Cardinal 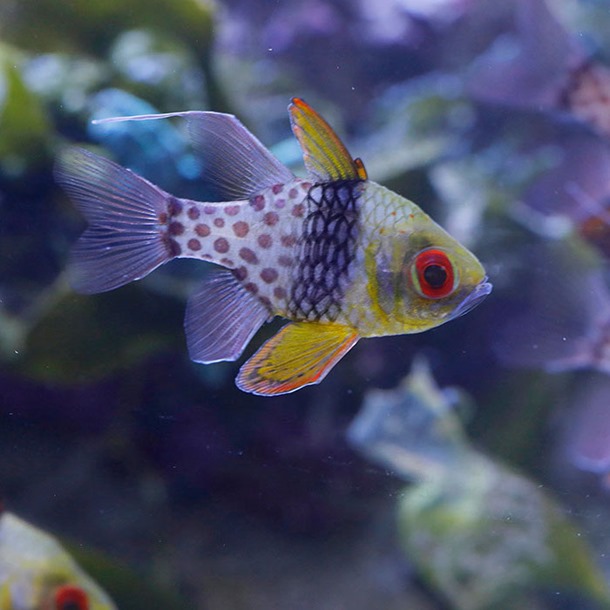 All of our livestock are only available for collection
Product Code: RNC-01232 In Stock
Share it

Reward Points
You will earn 24 Points
Select option:
Add to My Save List
Close

Pyjama Cardinal also known as the Spotted Cardinal or Pajama Cardinal are found from Java to Fiji, north to the Ryukyu Islands, south to the Great Barrier Reef.

The Pyjama Cardinal is a rainbow of playful colours. It has a greenish-yellow face, bright orange eyes, and a silver-based body dressed with a bold black scalar margin and a posterior dotted with orange polka-dots. Though its bold colouration may stand out, Pyjama Cardinal has a peaceful nature that lets it blend perfectly into any community saltwater aquarium.

For the best care, the Pyjama Cardinal should be kept in small schools in suitably sized aquarium. Because the Pyjama Cardinal is a slow and methodical swimmer, it should be housed with peaceful tankmates and offered a plethora of hiding places amongst rockwork or plants. Most Pyjama Cardinal will tend to hide in sea grass or other plants. Some may also camouflage themselves against long spined sea urchins.

Like many other schooling fish, the Pyjama Cardinal will form a strict hierarchy when kept in small groups within the aquarium. However, unlike some social fish, this member of the Apogonidae family does not use aggression to exert dominance over other cardinalfish.

The Pyjama Cardinal requires a well balanced diet of foods such as flake foods, pellet foods and chopped meaty foods.