Please note: You are now making an order on behalf of a user.
Home > Marine Fish > Rooster Hogfish 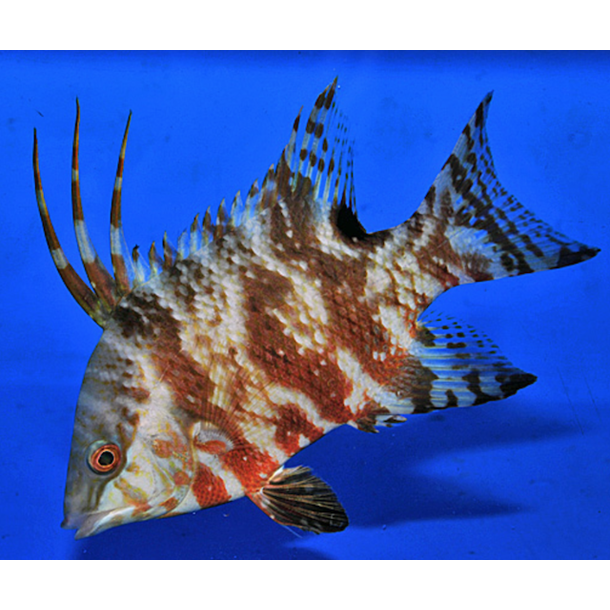 All of our livestock are only available for collection
Product Code: RNC-01823  Available To Order
Share it

Reward Points
You will earn 93 Points
Select option:
This Product is Available For Pre-order!

The Rooster Hogfish is a very large wrasse/hogfish. As juveniles they’re very well camouflaged with a cream-white base colour with greenish brown scribbled pattern on top. Already at a very young age the first 3 spines of the dorsal fin begin to grow longer. As they grow older the dark pattern becomes a beautiful red before they change appearance again and become cream-white with a slightly darker stripe from the eye to the dorsal fin. Fully grown they become more of a grey colour, the pectoral fins become yellow and from the lips to the dorsal fin and all along the back becomes dark brown. In the caudal fin a dark vertical bar appears and on the head they develop a faint blue reticulated pattern. Although it doesn’t look like it, they have a very large mouth.
Not many fishes do change colour/pattern this often, making it an interesting fish to see during every stage of their life.

Due to its very large adult size, this fish is off course only suitable for a very large aquarium. In nature they feed mainly on mollusks, but they won’t pass on crab or sea urchin either, so make sure to pick tankmates with care.