Please note: You are now making an order on behalf of a user.
Home > Marine Fish > Sea Grass Wrasse 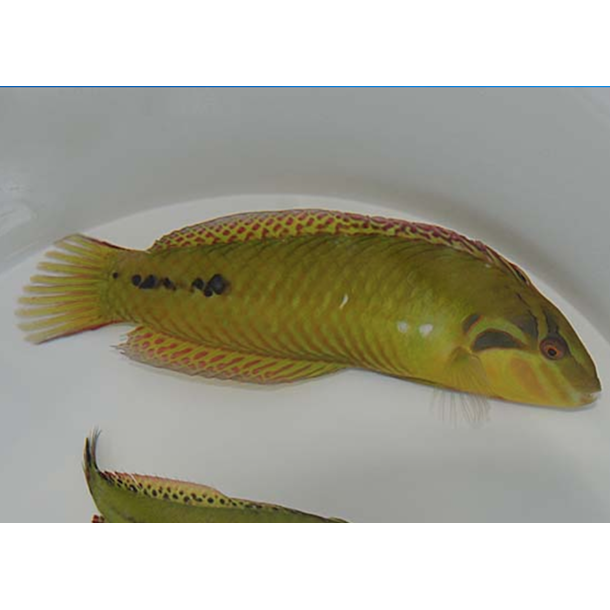 All of our livestock are only available for collection
Product Code: RNC-01754  Available To Order
Share it

Sea Grass Wrasse also known as the Basilisk Wrasse, Emerald Wrasse or Seagrass Razorfish are found from the Red Sea and East Africa to New Guinea, north to the Ryukyu Islands, south to Lord Howe Island.

The Sea Grass Wrasse is a helpful pest controller with big personality and abundant beauty. Often seen in shades of light to dark green, brownish-red to even black, the Sea Grass Wrasse's blade-like body allows it to disappear into the sea grass beds and sandy algal flats of lagoons and mangrove channels it calls home. They're even known to swim like free-floating, swaying algae in order to camouflage themselves from predators.

If you're looking for a natural way to control flatworms, pyramid snails, montipora eating nudibranches, and more, the mild-mannered Sea Grass Wrasse has the crushing teeth and carnivorous appetite for the task. The Sea Grass Wrasse diet should also include vitamin enriched frozen mysis shrimp, vitamin enriched frozen brine shrimp, and other meaty foods.

The Sea Grass Wrasse should reside in a 70 gallon or larger aquarium with a 2-4 inch sandy bottom in which it can submerge itself since it sleeps in the sand. It may be kept with fish that are aggressive or larger than it is, but should be housed with more passive fish as a juvenile. The aquarium should also have a tight-fitting lid to prevent it from jumping out.