Please note: You are now making an order on behalf of a user.
Home > Marine Fish > Skeletor Pebbletooth Moray Eel 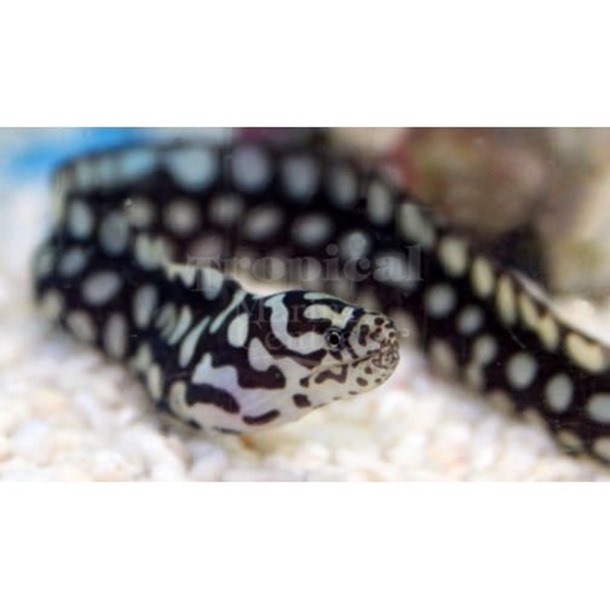 All of our livestock are only available for collection
Product Code: RNC-01385 Available To Order
Share it

The Skeletor Pebbletooth Moray Eel is an attractive eel with a dark brown to black body that is cryptically patterned with large white to yellow coloured spots. Considering the way the spots give it an extraordinary skeletal appearance, it is easy to see how it received the whimsical, pop-culture-inspired nickname Skeletor Eel. This disruptive colouration helps to "break up" the appearance of the Skeletor Pebbletooth Moray Eel allowing it to better conceal itself from both predator and prey.

The Skeletor Pebbletooth Moray Eel requires an aquarium with very strong filtration. The addition of an efficient protein skimmer is highly recommended as the carnivore diet of this eel tends to generate a lot of waste. Aquascape liberally with live rock of varying shapes and sizes to create a network of caves, crevices, and tunnels for your Skeletor Pebbletooth Moray Eel to explore and seek shelter during the day. Large or appropriately sized PVC tubes can also be used to create artificial "dens". Most active at night, the Spotted Moray Eel spends most of the day hiding, moving about mostly at night in search of food.

All Moray Eels are escape artists and to prevent loss, secure a tightly-fitting aquarium top and make sure there are no openings for the eel to slip through.

The Skeletor Pebbletooth Moray Eelis generally a nonaggressive species that can be kept with other Morays, as well as with other fish as they rarely consume fish tank mates. They will however feed on ornamental crustaceans.

A predator by nature, the Skeletor Pebbletooth Moray Eel requires two or three substantial meals per week comprised of meaty foods such as live or frozen fish such as silversides, krill, shrimp, or crustacean flesh, offered on a feeder stick. Moray Eels have poor eye sight and should never be fed by hand to avoid injury. It is imperative to be cautious with Moray Eels as they possess powerful jaws along with seriously sharp teeth.