Please note: You are now making an order on behalf of a user.
Home > Marine Fish > Splendid Pencil Wrasse 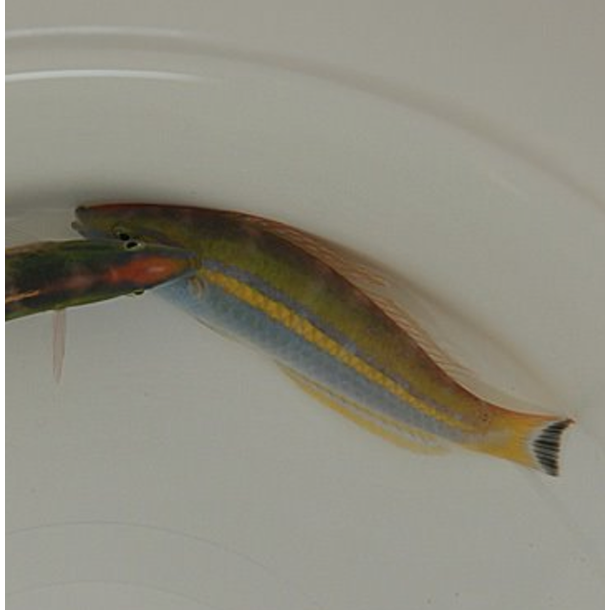 All of our livestock are only available for collection
Product Code: RNC-01872  Available To Order
Share it

Reward Points
You will earn 104 Points
Select option:
This Product is Available For Pre-order!

Splendid Pencil Wrasse are found from Japan, south to Australia, Northern Marianas to Lord Howe Island, eastward to Kwajalein Atoll in the north and to Samoa in the south.

The Splendid Pencil Wrasse males are mostly green in overall colour with two vivid light blue facial stripe markings. This bright blue colour continues as a horizontal stripe down the middle of the fish extending to the base of the tail with a complimentary, yet contrasting yellow stripe running parallel along the bottom of the blue stripe. The tail fin starts out yellow in colour and the back half darkens to black. The fins of the male Splendid Pencil Wrasse echo its body colouration but are slightly transparent in appearance. Female Splendid Pencil Wrasse are pastel pink to red in overall colouration. The female also displays a muted yellow color on the mouth, chin and eyes with mostly transparent fins.

For best care, the Splendid Pencil Wrasse should be housed in an established, well-filtered aquarium. It is a jumper, so a secure lid on the aquarium is required.

The Splendid Pencil Wrasse may be very difficult to keep in an aquarium due to its feeding habits. When first introduced into the aquarium, live feeder brineshrimp or mysis shrimp should be used to entice this fish to eat. It eats very small invertebrates (amphiopods) that grow on live rock. The diet should also include live, small feeder shrimps (brine, mysid) and finely chopped marine meats.