Please note: You are now making an order on behalf of a user.
Home > Marine Fish > Stars and Stripes Dogface Puffer 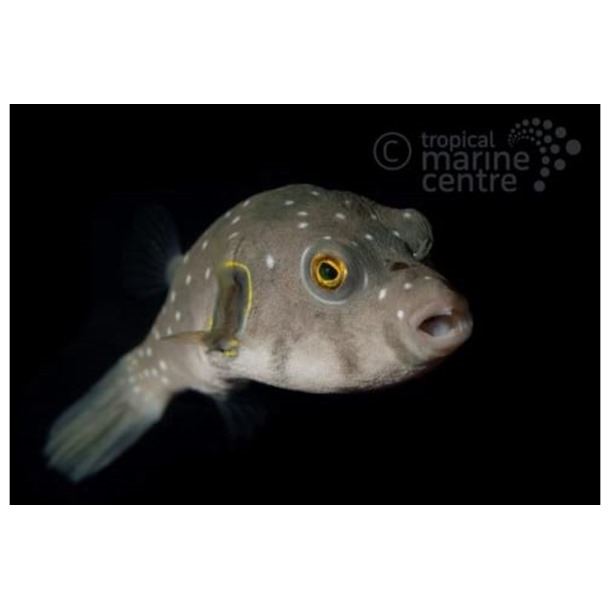 All of our livestock are only available for collection
Product Code: RNC-01593  Available To Order
Share it

Stars and Stripes Dogface Puffer also known as the Whitespotted Puffer or Hispid Puffer are found from the Red Sea and East Africa to Panama, north to southern Japan and the Hawaiian Islands, south to Lord Howe and Rapa islands. Baja California and the Gulf of California.

Members of the genus Arothron, including the Stars & Stripes Puffer, are sometimes called "Fat Puffers" or "Dogface Puffers" and exemplify the typical puffer design. Though lacking pelvic fins and a hydrodynamic body shape, puffers are extremely maneuverable and are tenacious and capable predators. Like many "Fat Puffers," the Stars & Stripes Puffer displays an unusual degree of "intelligence" and "personality" and appears to quickly recognize their owners.

In the wild, the Stars & Stripes Puffer inhabits a wide range of habitats including mangrove swamps, seagrass beds and reef flats. The ideal setup should be an established aquarium 180 gallon or larger with good filtration and a protein skimmer. Aquascape liberally with live rock and other materials to create an environment rich with nooks and crannies, caves, and overhangs while preserving easy access to large open areas. House with fish of similar size and temperament and be aware that the Stars & Stripes Puffer will eat invertebrates found in the aquarium using its fused beak-like teeth to crush open its prey.

The diet of the Stars & Stripes Puffer should include a variety of meaty food including squid, krill, clams, and hard shelled shrimp to help wear down their ever growing teeth.