Please note: You are now making an order on behalf of a user.
Home > Marine Fish > White Banded Possum Wrasse 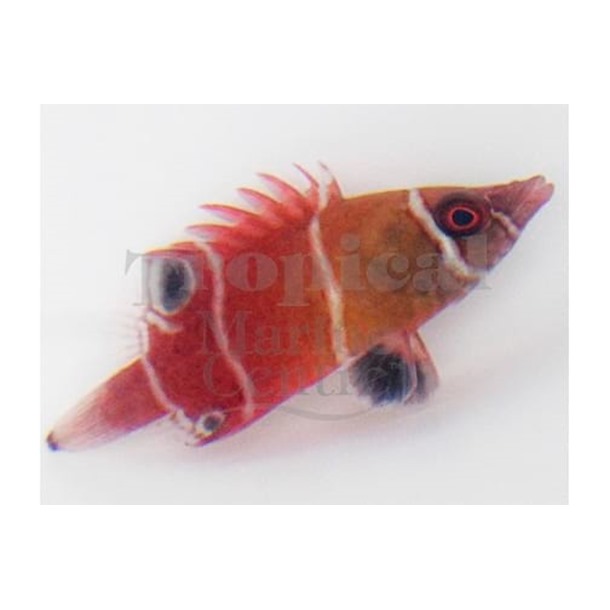 All of our livestock are only available for collection
Product Code: RNC-01750  Available To Order
Share it

The White Banded Possum Wrasse is a popular and easy-to-keep Pygmy Wrasse from Indonesia known to thrive in a wide range of aquarium setups. The White Banded Possum Wrasse has an arrowhead like shape and is mostly red/black in colour with white vertical stripes. The male and female of this species are very similarly colored, but when courting, the male will display increased colour intensity. Colours may vary depending on the fish's mood.

The White Banded Possum Wrasse is a very peaceful, active fish that will bring both color and activity to a fish-only or reef aquarium of 10 gallons or larger. They will not bother any corals or invertebrates making them a perfect fish for the reef aquarium. A single male can be kept with a group of females that is introduced prior to or at the same time as the male. These wrasses like to jump, so a tight-fitting canopy is recommended.

According to guest Wrasse expert Scott W. Michael, "These microcarnivores will feed on tiny worms and crustaceans that associate with live rock. They also readily take aquarium foods, like mysis shrimp, frozen preparations and flake food. My Wetmorella seemed to prefer CYCLOP-EEZE®, which they pick out of the water column. Even though they will eat introduced fodder, I think it is still best to house them in a tank with live substrate because they are so reclusive (especially when first added to a tank) and prone to being dominated by tankmates. This will enable the possum wrasses to feed throughout the day on the minute prey living on the rock. A productive refugium can also be helpful to ensure that they get enough to eat."