Please note: You are now making an order on behalf of a user.
Home > Marine Fish > Yellowfin Flasher Wrasse 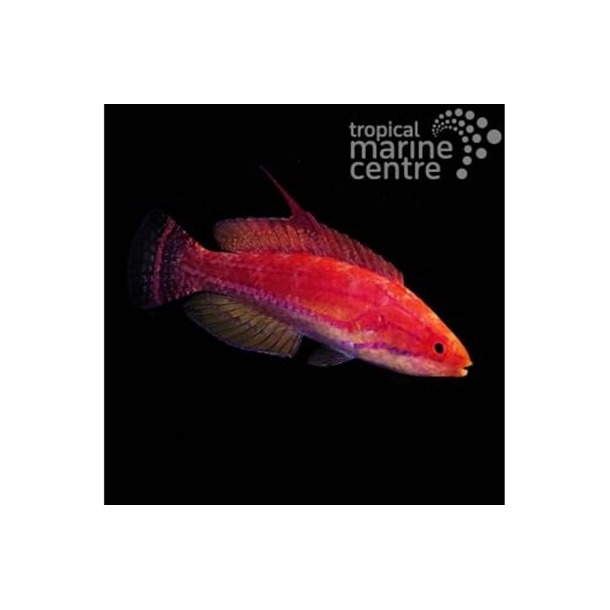 All of our livestock are only available for collection
Product Code: RNC-01799 In Stock
Share it

Reward Points
You will earn 38 Points
Select option:
Add to My Save List
Close

Not described until as recently as 1999, the Yellowfin Flasher Wrasse is one of the newest and most exciting wrasse to enter the hobby. This peaceful but active show-stopper makes a perfect addition to your peaceful community reef aquarium.

The colour of the female is subdued when comparing it to the brilliance of the male. The male during courting will change colours very rapidly, giving it its common name. Colours may vary depending on the fish's mood, and the exact locale of collection, and age of the fish, but most adult male Yellowfin Flasher Wrasse are vivid red in colour, with subtle blue running at the base of the dorsal fin. Oftentimes there is a faint blue stripe running down the length of the body through the center of the caudal fin (tail). These fish are unique in having one to four red/orange filaments off of the dorsal fin, which can change coloration to white or yellow during their courting display.

In their natural habitat, Yellowfin Flasher Wrasse have been reported from shallow crests to depths of up to 114 ft. in sheltered reefs. Be sure to provide plenty of rockwork in which to hide and build a sleeping area, though much of the time Yellowfin Flasher Wrasse prefer schooling in the water column with other wrasse. A single male can be kept with a group of females that is introduced prior to or at the same time as the male. These wrasses like to jump, so a tight fitting canopy is recommended.

Flasher wrasses should be fed two or three times a day in order to maintain their body weight. Since they feed on zooplankton and rarely pick at organisms on live rock, they will not thrive in the reef tank if they are fed infrequently. The Yellowfin Flasher Wrasse diet should include vitamin enriched frozen mysis shrimp, vitamin enriched frozen brine shrimp, and other meaty foods along with a high quality marine flake and marine pellet food. A good protein skimmer and Live Sand will help decrease the build-up of dissolved organics that may result from this more regular feeding regime.