Please note: You are now making an order on behalf of a user.
Home > Critters > Black Foot Snail 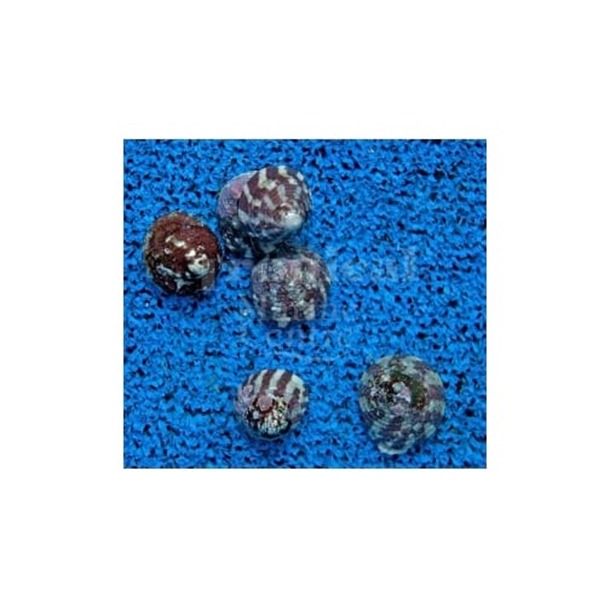 Reward Points
You will earn 4 Points
Select option:
Add to My Save List
Close

Black Foot Snail also known as the Banded Snail or Self Righting Snail are prized by marine aquarists of all experience levels for numerous reasons. Like other members of the Trochidae family, the Black Foot Snail is easy to care for and very adept at working as your aquarium's cleanup crew.

Perhaps what many aquarists appreciate the most is the ease with which Black Foot Snails seem to breed in the home aquarium. It reproduces sexually by releasing gametes into the water column. The gametes appear as a cloudy, white substance. Breeding activity is usually sparked by changes in lighting or water conditions. After the gametes join, they develop into free-swimming larvae that eventually settle into your aquarium substrate and develop into mature snails over a period of a few months. The Black Foot Snail is well suited for reef aquariums. As a general rule, you can keep one snail for every 10L of aquarium water.

The Black Foot Snail is very peaceful and because of its shell shape, it is not easily eaten by crabs. Unlike its close relative, the Turbo Snail, the Black Foot Snail can right itself when knocked over. The Black Foot Snail does best in a well-established aquarium with ample hiding places and room to forage. It naturally feeds on algae, cyanobacteria, and diatoms amongst your live rock, substrate, and aquarium glass. The Black Foot is also an effective film algae eater. However, they only passively graze on other nuisance algae, such as hair algae.

Like other invertebrates, Snails are sensitive to high nitrate levels and intolerant of copper-based medications. It requires a gradual acclimation process, preferably the drip acclimation method.

If food levels are insufficient in your aquarium, supplement their diet with dried seaweed. Though most Black Foot Snails seem to breed easily, there are no distinguishing characteristics between males and females.